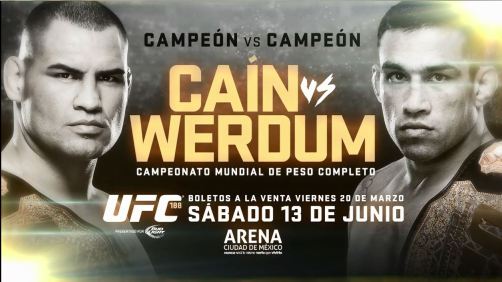 Before the 20 fighters competing on the UFC 188: Velasquez vs. Werdum pay-per-view fight card on Saturday step inside the cage, they had to first step on the scales and make weight in Mexico City on Friday.

A heavyweight title unification bout between champion Cain Velasquez and interim titleholder Fabrico Werdum headline the event. Velasquez last fought in October 2013. The two were originally scheduled to face off at UFC 180 in the same venue as Saturday’s fight card but a knee injury forced Velasquez out of the fight. Werdum fought Mark Hunt instead and won the interim belt by finishing the “Super Samoan” in the second round. The true champion will emerge on Saturday.

The co-main event consists of a grudge match between lightweights Gilbert Melendez and Eddie Alvarez. It’s a fight that has been talked about for five years and this weekend it will finally happen.

The event is expected to be headlined by a UFC Heavyweight Championship unification bout between current champion Cain Velasquez and interim champion Fabrício Werdum. The bout was originally expected to take place at UFC 180. However, Velasquez pulled out of the bout due to a knee injury and the event was instead headlined by an interim title bout between Werdum and Mark Hunt.

A lightweight bout between Francisco Trevino and Johnny Case was originally expected to take place at UFC Fight Night: McGregor vs. Siver. However, on December 23, it was announced that Trevino had to pull out of the bout due to an injury. The fight was later rescheduled for this event.

Héctor Urbina was expected to face Albert Tumenov at the event. However, Urbina was forced to pull out of the fight due to an arm injury and was replaced by promotional newcomer Andrew Todhunter. The bout was then cancelled altogether on June 11 after Todhunter was medically disqualified from the card after dealing with issues while cutting weight. Tumenov will still make weight for the event in order to earn his contracted show money.